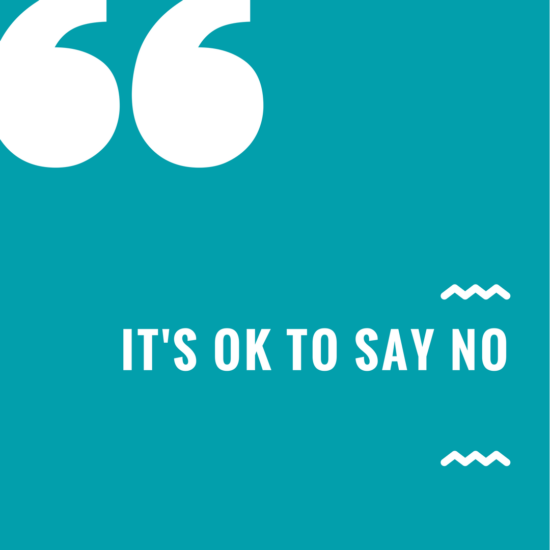 It’s Ok to Say NO

Going back to work after maternity leave or an extended break is hard. You’re leaving your child for the first time, you have to settle into ‘work mode’ again and chances are, you are feeling a little overwhelmed by everything. The mummy guilt is rife and it can feel like you’re at work in body but in the early days, your head is somewhere else.

Remember to be kind to yourself and ease yourself in gently, just like you eased your child into their new childcare setting. You didn’t dump them at the door and expect them to settle so don’t expect that of yourself. When you first return to work, it’s ok to say ‘no’ and allow yourself time to adapt and there are ways to do this without appearing negative or like you’re not up to the job.

It’s not weak to admit that you’re finding things difficult. Many of your co-workers will be parents too and will have been in similar positions. They will have your back. Don’t hide how you’re feeling and pretend you’re ok if you’re not. This will mean you will feel isolated and alone, your work will suffer and this is benefiting no-one. If you simply can’t take on another task, be honest about how you’re feeling and say no.

Be at ease with the fact that your situation has changed

There is no getting away from the fact that you are a different person now than when you left to go on maternity leave. You need to embrace this and all the positives that come with it. It may be that you’ve gone back to work part-time and it’s quite a change from full-time with the flexibility to work late or come in early. There may also be the desire to get the same amount done as you did before but that just isn’t possible when you work less hours. Accept this and know it’s ok to say no to things that you would have been able to say yes to before. There will be so many things that you’ll now be better at to more than make up for it.

Have some responses prepared

So that you’re not put on the spot when you’re asked to do something you don’t feel comfortable with, have some responses prepared in advance so you’re not left stuttering a long excuse. Something simple like ‘thanks for asking me but I’m at my limit with projects right now’ should do the trick.

If you mean ‘no’ say ‘no’. Don’t give an ambiguous response that will leave you open to persuasion. Something like, ‘No, I’m sorry but I have family obligation after 5pm’ is firm, fair and not at all rude. Make sure you end firmly so there is no room for negotiation. For example, ‘I hope you find someone else’.

It might be that saying ‘no’ sometimes is not going to be possible. In this situation, come to a compromise. You may not be able to do that morning networking event, but can you volunteer to do the staff training that requires a volunteer instead?